Pressing the combination of Shift+Del keys deletes the selected file/files. When a user presses the keys combination of Shift+Delete keys for permanently deleting a task, which is there in the folder of “Scheduled Task” and the user sees the Display delete confirmation dialog check box as selected, the he receives the confirmation message that states:
“Are you sure you want to send Task Name to the Recycle Bin?” 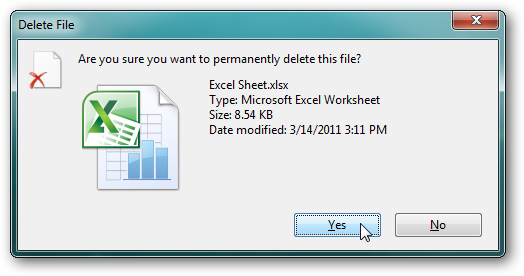 For permanently deleting that file from the hard drive space, the user needs to click “Yes” on receiving the above-mentioned message pop up, and after that deletion of the task has to be done from the Recycle Bin too by following the below-mentioned steps:

Intentionally pressing the keys combination of SHIFT+Delete keys in the MS Windows OS, the most expected way is that the user wishes to delete those files/folders permanently and he does not wish to send them to Trash or Recycle Bin. On using the keys combination of SHIFT+Delete on any of the files or folders which are not there in the “Scheduled Task folder”, the user receives the confirmation message as stated – “Are you sure you want to delete Filename?” On clicking the button, “Yes”, immediately that program will be deleted permanently from the space of the hard disk and it will not be placed inside the system’s Recycle Bin. On using the key combination of SHIFT+Delete for deleting some task from the folder of “Scheduled Task” with the “Display delete confirmation dialog check box” as not selected, then, in this case, the user is sending that selected task/file to the system’s Recycle Bin without deletion confirmation.

Sometimes, while using the computer system and to deal with the accumulation of a lot of data, the users sometimes, tend to remove some of the obsolete files/folders in order to free some disk space. Sometimes, in this undertaking to free disk space, we unknowingly tend to erase some crucial files, which we later realize that those files are important for us. Even when the users store a large amount of significant data kept on the hard drive, they do not take efficient measures to protect those crucial files until it is too late. This “loss” can easily happen with anyone and at any point of time; presumably when the user is least expecting it. It is really very frustrating to lose some of the most significant and valuable data! Since those files were removed from the system by pressing “Shift + Delete” keys shortcut, the user cannot locate that file inside the system’s Recycle Bin. But what is to be done after that? There is nothing to panic, as there is still a way to get back the deleted file. Most of the computer users are of the view that the files deleted using shift+del cannot be recovered, but the fact is that you still hold a chance of recovery even after permanent deletion of files. When you click Shift+del, files do not go to Recycle Bin; and they are seemingly deleted permanently with no chances of restoration. This is however not true, as Shift+del files can also be retrieved.

When and How to Find Lost File?

It is possible to recover lost or deleted files, as, every time a file is deleted from the system; the Operating System does not delete it permanently and does not erase it then and there from the hard disk space. It only deletes the file’s index entry and marks its storage space as free or empty for any new data to be added there, and so, it is there until it is overwritten by some new data. Therefore, until and unless those crucial deleted file is not totally overwritten by new data, those significant erased files have a chance of recovery and the user can easily recover deleted files by using a good 3rd party tool like data recovery software.