Citrix XenServer is basically a complete enterprise-class, cloud-proven, and managed virtualization platform constructed on the super powerful Xen hypervisor which provides all significant features that are required for the implementation of the virtualization of any of the servers and datacenters. The Xen technology is now widely known and acknowledged and recognized as the safest and the fastest virtualization software in whole of the binary industry. The Citrix XenServer has been designed specifically to provide better and more efficient management of the virtual servers in the Linux and MS Windows environment, whereby, delivering cost-efficient and gainful server consolidation as well as an unremitting business continuity.

What Actually is Server Virtualization ?

Server virtualization is basically an established technology enabling several VMs (virtual machines) for running on one single physical server. In this set up, all VMs would be completely isolated from each other and are dissociated from the primary host through a very thin software layer called as the hypervisor. This allows every VM for running multiple OSs as well as applications on a single machine. Now, as all the systems are uncoupled from the principal host, the guest can be moved easily from 1 physical host server to another physical server host, even while it is running; this is what is called “live migration”. Such attributes are revolutionizing the technology world and transforming the enterprises to approach technology at another level i.e. virtual computing.

Why Should We Select XenApp?

As discussed above, the XenServer is a cloud-proven and an enterprise-ready virtualization platform which has all the potential needed for creating and managing a whole of the virtual infrastructure. XenServer is today entrusted by most of the demanding enterprises for running their applications which are the most mission-critical and that are utilized by the largest of the clouds. Citrix XenServer helps the organizations in starting their own virtual infrastructure along with the free server virtualization software to easily consolidate organizations of any size with this premium edition.

Some More Benefits of Server Virtualization

The best part about Xen is its support for VM live migration from 1 particular host to some other, which further helps in equilibrating the workload and avoiding any downtime occurrences.

XenServer is a hypervisor platform which contains virtual machine to monitor and manage the allocation and distribution of physical server computing resources among virtual machines and controls their performance and use. It creates and manages the virtualized server infrastructure in order to choose the platform as well as hardware. XenServer is developed by Citrix Systems over the hypervisor of Xen Virtual Machine.

Hypervisor is a program that has 64 bit hypervisor platform which can be executed on the entire x86 series of processors and also allows multiple operating systems to share a single hardware host. XenServer is built to provide the standard server operational requirement and support most server operating systems like Windows Server and Linux on the server of guest machines. 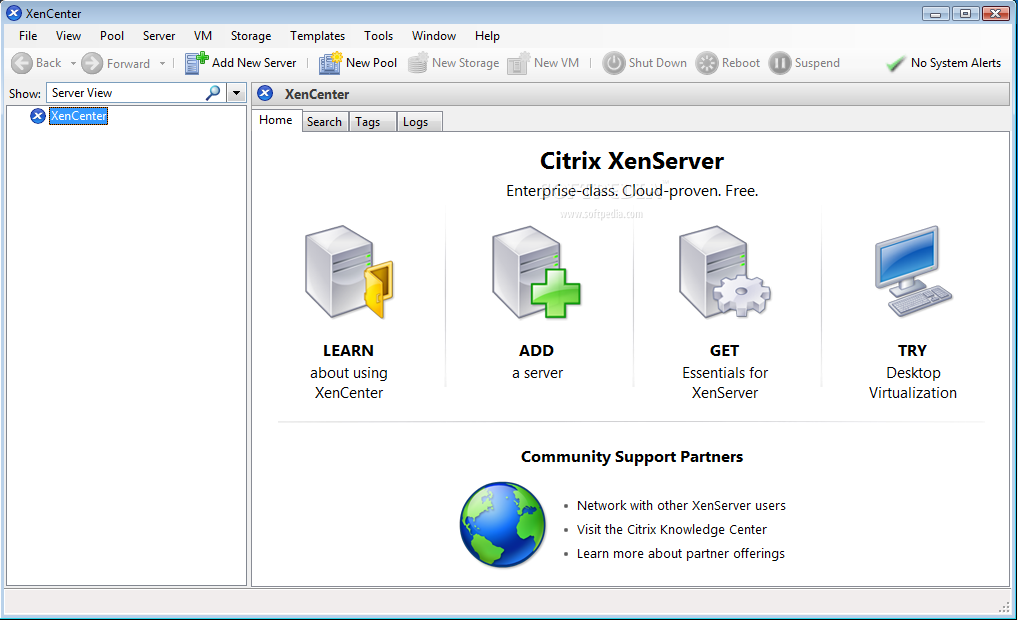 XenServer offers grade A performance to Citrix applications and desktop virtualization platform that maximizes the VM density, reduce the storage costs of infrastructure with the feature of In-Memory Read-Cache and increases the experience of end user with the features of leading industry such as vGPU and GPU pass-thru.

XenServer make use of local storage disks in order to control virtual machines and to enable sophisticated features like XenMotion. XenMotion is a feature of XenServer that allows the user to move running virtual machine from one physical host system to another. XenServer contains two local storages i.e. EXT and LVM. EXT is default local storage on XenServer and has the capability to control raw VHD files and to use sparse storage. LVM is faster and more secure as compared to EXT. Default logical volume named as “MGT” is created by XenServer on LVM based storages.

Why there is a need to create MGT logical volume on LVM storage?

We create MGT logical volume on LVM storage for future purposes in order to store metadata automatically on a storage system. However, nowadays no one use this dynamically. You can see this volume using “Ivscan” as command which show something like this:

Sometimes it happens that users are unable to attach a storage repository again in a precise condition. The reason behind this could be the inconsistent data in MGT volume. In this case you can try to rename MGT volume to force it being re-created automatically. However, it does not contain important data for production and beware that you run above commands on your own risk, if you are in doubt then do contact support team.

Note: OVF file is XML based which is used to describe single virtual machine or virtual appliance. It contains the information about virtual disk image file. OVA is an OVF file packaged together will all of its supporting files.

OVA stand for Open Virtual Appliance or Open Virtual Application. It is simply a one single distribution of file, in the package, which is saved in TAR format. The package consists of the files that are used for describing a VM; which consists of certificate files, an .OVF descriptor file, and an optional manifest (.MF), and also some of the other related files; which are all saved in one single archive utilizing.TAR packaging. The file extension, “.ova” has been attached to the files, which consist of the VMs descriptions. The files with .ova extension are basically the package files which consist of the virtual machine descriptions, their certification details and other information about the VM. The OVA files basically contain multiple files in a single archive, and this is the reason why they are known as “Open Virtual Applications”. These are the data files, as they will not be used for executing a VM. They only have the VM information.

Citrix makes use of the OVF files for VMs. OVF stands for “Open Virtualization Format.” It is basically a packaging standard which has been designed for addressing the portability as well as for the deployment of the virtualization appliances. OVF can also be called as the open standard for distributing and packaging virtual appliances, or in other words, the software that has to be run inside the VMs. This standard delineates an open, portable, secure, efficient as well as an extensible format for the packaging & distribution of the software that are to be run in the VMs. This OVF standard is not attached to any specific hypervisor or any particular processor architecture. The packaging & distribution unit, which is the so-called OVF Package, might consist of 1 or more virtual systems, wherein, each of those virtual systems can easily be deployed to a VM.

One can easily import a XenCenter virtual appliance by the following steps:

One can export a virtual appliance by following this step: 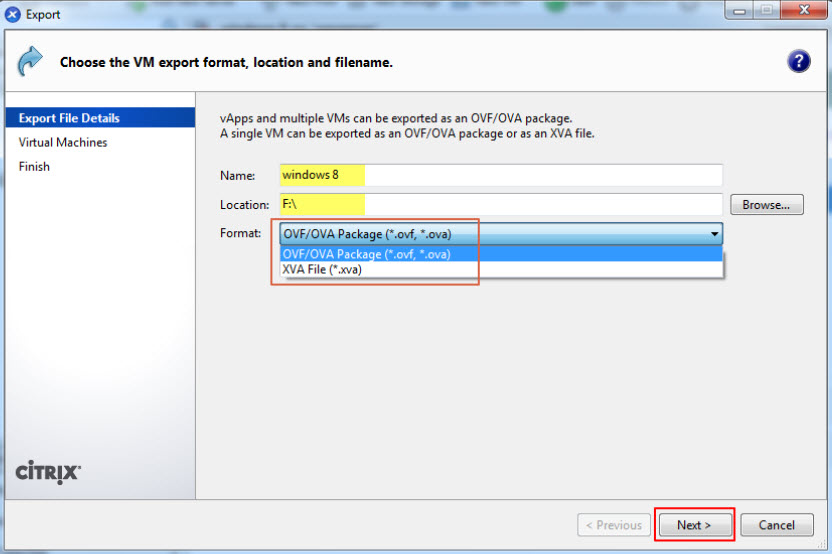 VHD represents “virtual hard disk”. The .VHD file extension is for the file format for the disk image which is used to store the entire content of a hard disk drive (HDD). VHD is usually used as a VM’s hard disk. We can also say that VHD is the file format representing a virtual HDD. It may contain all that is seen of a physical hard disk drive like disk partitions, file systems, files and folders etc. VHD is basically the format, which is used for the Virtual Servers and the Hyper-V hypervisors.

VMDK stands for “VMware Virtual Machine Disk”. The VMDK file is basically a format specification for the files of the VM.  A file having .VMDK extension is effectively an independent and complete VM. Originally, VMDK was developed by VMware, but now, it is a completely open file format. Other platforms which support. VMDK files are QEMU, Sun XVM, and VirtualBox. VMDK competes with VHD.