The Linux KVM i.e. the Kernel-based VM (Virtual Machine) is basically a complete solution for virtualization for Linux on the “x86” hardware that consists of the extensions for virtualizations including the Intel VT/AMD-V. This comes with an absolutely loadable module (kernel module), the kvm.ko that provides the complete core infrastructure for the virtualization along with a module that is processor-specific, kvm-intel.ko/kvm-amd.ko. Using Linux Kernel based VM, you can easily run more than one VMs that are running with unmodified images of Linux or MS Windows. Every VM can have its own specific hardware that is virtualized, which consists of the disk, the network card, and the graphics adapter, etc.

Networks That Are Supported

The virtual disk storage options and the image repositories include the types given below:

Tasks That Are Supported

With the Linux kernel-based VM’s virtualization environment, one can easily complete the following tasks:

KVM is shortened for “Kernel-based Virtual Machine”, which is a complete virtualization system for Linux on the specific “x86” hardware that consists of the 2 different virtualization extensions (that are Intel VT and AMD-V). With the help of KVM, you can easily run more than one VMs that run non-modified Linux or Microsoft Windows images. Each VM has its own separate virtualized private hardware; which consists of a disk, a network card, a graphics adapter, and more. KVM is actually an open source software solution. 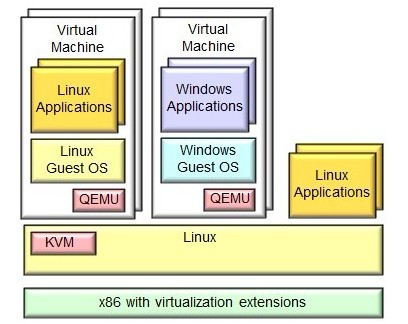 It is the QEMU Storage

There are 2 complete storage sacks

Some Points to Ponder

This means to provide more optimal interfaces than the real hardware.